A couple weeks ago the very first Ubud Village Jazz Festival happened in Bali!  Not sure if I ever mentioned this, but in Australia I was bestowed with the moniker of "Jazz Girl!"  Not only do I LOVE jazz, my voice is jazzy, I sing jazz and generally feel giddy when people go off the beaten track and jam (by the way, this excludes most elevator jazz for those of you who are thinking about rolling your eyes.) 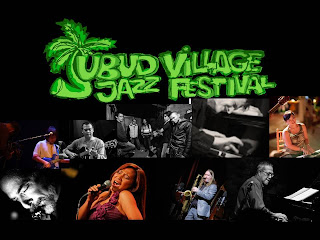 Jazz is a language.  The framework consists of the same 12 keys which are interpreted into 4 scales (major, minor, major melodic & minor harmonic.)  They say to really become jazz proficient and have great dialogue with other musicians, you have to be fluent in all of the possible combinations.
While I'm definitely NOT there right now (and singers are generally held to standards that are a bit different) once you understand how much work it takes to get there, and you get what's going on, the real appreciation begins.

Seeing everyone play in their trios and groups was fantastic, but the real fun started at the after-hours jam sessions held on both nights of the festival.  The nice thing about jazz being it's own language, is that no matter what country you're from, if you know the framework, you can communicate and create something greater than the sum of its parts, musicians or instruments.

While I've been stuck in the stone age (i.e. without a camera) I'll forgo the cave drawings and share some links that others posted:

Peter Beets is RIDICULOUS.  I couldn't find a clip from him at the UVJF, but this is an original that he and the same trio (Marius Beets on double bass & Gijs Dijkhuizen on drums) play and one of my favorites!


And last, but certainly not least, are festival darlings Ventura Trio! Janice, Bruno & Marcus came all the way from Brazil, and are so in sync with each other (I really hope Justin Timberlake & crew didn't completely ruin that phrase) you could tell they just LOVE playing together!
They made a great video of their time here in Bali.  Watch out for some great music, Kopi Luwak, Gavin Shoesmith's Blues for Fi, and your's truly at 7:38 :)
http://www.youtube.com/watch?v=_4Cb_p4SPM4


There were so many other great musicians at the festival!  Check out Ubud Village Jazz Festival for upcoming events and updates for next year's fun!

My album, The Devilicious Sessions, was just recently released on July 11th,
and is available on iTunes
Check out me, Norma Jean, on facebook for all
performance updates, new songs, and other musical shenanigans!
Plot Point by Unknown at 10:33 PM

Email ThisBlogThis!Share to TwitterShare to FacebookShare to Pinterest
Stuff This is About: Norma Jean, Ubud Village Jazz Festival