Buy the ticket, take the ride or One Night Only 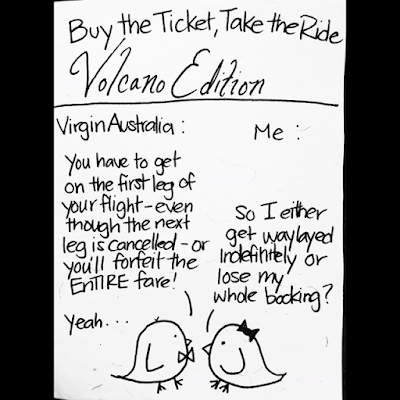 I started seeing posts and getting messages on my facebook last night.. Rinjani's erupting again, flights are being cancelled.  Friends and acquaintances waylayed at airports around the world.

So I call Virgin Australia when I got home for work and they confirm, some flights have been cancelled, but mine's still a go.  I'm flying from Christchurch to Brisbane to Bali.  I think, OK, this ash cloud is going to blow over, I'll be there tomorrow night, Bintang beer in hand.

I called again at 4am before my 6:30AM flight.  No they said, my flights still a go.  So I take my bags and my wonderful flatmate, and we haul out to the airport.  Upon arrival I'm told my flight's still a go, but the leg from Christchurch to Brisbane has been bumped to an afternoon flight run not by Virgin Australia, but Air NZ (of which I conveniently received an official email from Virgin Australia stating this change when we return from the airport at 6:00AM.)

I also call the travel agent I've booked with, Escape Travel, and am told to wait until we hear from Brisbane, where "ash cloud meetings" are held to determine whether flying conditions are OK.   Additionally they inform me that not only can they generally only notify of changes during their business hours, but my Bali flight is still a go and I should WAIT UNTIL WE HEAR AFTER THE MEETING TO CHANGE MY FLIGHT.

At 2pm, when I hadn't heard, I called Virgin Australia.  They confirmed that Rinjani's still going, and the second leg of my flight, from Brisbane to Bali was cancelled, but that my flight from Christchurch to Brisbane was still all systems go.

Thinking this was pretty weird, I asked why they wouldn't just postpone the whole thing and I could stay in Christchurch until it's all sorted.

This is where a very fun little game of "buck passing" comes into play...

I was told yes, that is odd, but the travel agent booked the flight so any changes had to come through them.

I then called the Escape Travel again and they informed me that it was too late to pay to change the date of the first leg of my flight, and if I DIDN'T GET ON THE PLANE TO BRISBANE I would be treated a s a no-show, and forfeit the cost of my entire booking.

At this point, I thought, this is some sort of bureaucratic loop, it does't logically make sense.  Why would Virgin Australia fly me to Brisbane only to make me wait indefinitely (LITERALLY DAYS) for an ash cloud to move instead of just changing my booking?

So I head to the airport again thinking this is ludicrous, I don't know very many people in Brisbane.  Why would they waylay me in transit without support?

Low and behold, when I check-in for my first flight (it was operated by Air NZ but Virgin did officially book me on it from a Virgin flight with a forwarding itinerary to Bali!) the Bali flight was cancelled, and I was told they couldn't check my bags through to Bali, but Brisbane should know more about the whole situation, they're closer to the action, etc...

Virgin Australia even KNEW ABOUT THIS as the agent from AIr NZ couldn't fine the additional baggage I added to my ticket, so went over to the Virgin Australia counter to confirm the booking.

I thought, OK, this could make a little sense!  Maybe they've sorted it, or have a system in place, or are grouping people together from streamlined destinations to reduce the disruption to service.

Unfortunately, that is not the case, and the Brisbane branch of Virgin Australia were somewhat horrified to find that I'd been put on a flight at the risk of either losing my entire booking or being in limbo until a volcano stops erupting.

Logically, it would seem that you either change the flight, or accommodate those that are in Brisbane until this whole thing blows over (literally) and yet I was told they could either fly me back where I came from and further delay my arrival at my destination, or cover my accommodation for ONE NIGHT ONLY when I've been booked on a forwarding flight 3 DAYS FROM NOW!

As tempting as it was to hop on another 3 1/2 hour flight back to exactly where I came from, I opted for the hotel, and will be in Brisbane for the next few days.

I'm lucky enough that a bunch of people stepped up via a facebook post I put up, and I have friends and places to stay until I leave.

It's really mind-boggling that I was forced to choose between either losing my entire flight or showing up to a place without plans, without knowing if I had any people here, only to be told that I wasn't supposed to be here in the first place and that I'd only have a guaranteed place to stay for a night (when they re-booked me for 3 days later!)

Between Escape Travel and Virgin Australia, it looks like I just can't win, and that's a shame because when these things happen that's when a company really has the opportunity to be flexible, accommodating and at least cover a girl's hotel when she's told by literally every company representative to get on a flight to limbo!

Email ThisBlogThis!Share to TwitterShare to FacebookShare to Pinterest
Stuff This is About: Moving, Norma Jean, Travel